The 90s, one of the most competitive eras in boxing and, in particular, heavyweight champ Ray Mercer is discussed on this episode. Watch The Scoop from Monday to Friday featuring Canadian heavyweight champ Bola Ray, who lends his vast experience in the sport and provides his comments and analysis on boxing, on YouTube and TalkinFight.com/live. #boxinghistory​​ #raymercer​ #riddickbowe​ #bertcooper​ #tommymorrison​ #evanderholyfield​ #larryholmes​ #frankbruno​ #lennoxlewis​ #timwhitherspoon​
.
.
.
#boxer​​ #boxing​​ #boxingtalkshow

Hey good evening talk and fight fans around the world.

Welcome to another great episode lined up for you of neil the deal, and tonight we have a great profile of a great fighter: virgil, ortiz jr, i’m pretty sure you’ve got all the stats that we uh.

What do you got hey good evening, graham nice, to see you again, my friend thank you.

I really appreciate the likes the shares, all that kind of stuff just keep them flying.

We really appreciate it.

Things are going really well so we’ll talk about this young kid today and man.

This kid is awesome all right, so his name is virgil.

That makes them what 98 would be 23 years old, graham yep, so he’s just a young young lad out there, but man this this kid’s got some uh he’s got some real real potential guys so keep your eye out for this virgil, ortiz jr um last year.

Actually was the year before i guess now: he was uh named ring magazine prospect of the year 2019, hey graham, which is a big which is a big award to have because uh that’s recognized around the world as a guy who’s going to be not only uh.

You know well right now, but moving forward in the future.

He has a very bright future he’s in the uh golden boy.

All right like most of these young guys are.

I guess these guys have a lot of talent scouts out there, because every time we turn around, all you do is hear oscar de la hoya’s name and he’s just he’s just signing all these guys.

You know left right and center so good for him.

You know good for oscar thanks oscar for keeping these kids dreams alive and really appreciate that brother.

Right to present right now, so we’ll mention this a couple of times.

I i mentioned this to graham earlier on today.

He does have a big fight coming up guys, a big one, so you guys got to watch out for this guy.

Uh dazin’s been doing quite a number of uh, these big fights so the check the dates and stuff for these uh for these for these fighters a lot a lot of them are are on that network.

So if you guys can get that, i’m sure you can where you are around the world, the united states, canada.

You can get days and i have days, and so i wouldn’t miss it for an oven.

So, what’s that, graham sorry, the zone yeah exactly exactly so he’s uh he’s got the fight for the wbo vacant, international international welterweight title and he’s fighting uh, basically one of his friends.

Apparently they were kids growing up and they knew each other as amateurs um.

I believe that the individual he’s fighting is a little bit older, but not much a couple of years, maybe um, but it’s going to be uh virgil, ortiz, jr versus maurice moe hooker, that’s hooker! He is a past world champion hooker.

So he’s no slouch, that’s for sure, mr hooker and uh.

I know that uh from what i’ve been reading and what i’ve been hearing that they’re not taking this lightly like this guy, has got a serious chance, and this is a big step up uh for mr, mr, mr ortiz.

Sorry so he’s been uh he’s been training really hard.

Obviously that’s going to be what, graham, in less than three weeks now yeah right.

It’S it’s saturday, march 20th, on days, in probably being eight o’clocker and uh, there’s a bunch of uh bunch of pre-fights that you guys might want to check out.

Apparently he’s he’s a monster, he’s just a giant giant dude, so check out uh check out the whole lineup uh online and you can see exactly what fights are coming up that night.

So we’ll go over a little more about him, so so uh virgil, ortiz jr, he uh.

He started fighting at eight years old, although his father started playing around with him with it uh when he was five, so he was five years old.

His dad was kind of training him a little bit.

You know as a five-year-old.

I don’t know what kind of training he could do as a five-year-old, but you know i’ve seen i’ve seen kids win halo at five and i’ve seen him beat uh growing adults.

I’Ve seen grown adults, get beaten in checkers and then in chats and stuff by five-year-olds.

So never underestimate your opponent.

That’S all i got to tell you never underestimate your opponent.

You need to be at the top of the game all the time, no matter, if you’re up against a five-year-old or a 50-year-old, you know so he’s uh.

Basically, he had a fantastic amateur record, so we’ll go over that a little bit here.

So that’ll tell you, you know.

Seven time national champion is is is a really big thing.

He also was the winner of the 2013 junior olympics for his division in boxing, so i mean he’s really he’s really he’s really come around uh over the years and, like i say, he’s got a really big fight coming up guys, um, there’s not a lot on Him you know, because he’s so fresh and new, but they’re definitely grooming him to be like right in the mix.

Gram like they’re, definitely picking and choosing his opponents uh wisely and uh, and he looks like he’s like i’m telling he’s in my top five.

So he’s gon na be he’s gon na, be somebody to look out for his let’s go over his pro his pro stats right now, guys pro stats check this out young kid, so he’s got 16 fights under his belt 16.

That would make him no losses 16-0 and guess what graham 16 knockouts right.

So there you go.

His knockout percentage is a hundred percent nice and i watched a bunch of his fights today and then yeah.

He just he he’s got the whole package.

This kid he’s got everything he’s got, the speed he’s got he’s got the the work rate.

He really knows how to move, and he doesn’t make he he does.

He makes quick business of his opponents.

Most of his fights are definite are done within the first four rounds.

Not too many guys have lasted over four rounds in them, so i know that the next fight coming up is going to be a little different for him, because this is a big step up, so it’ll be really interesting to see, and he is the headliner graham.

He is headlining that card that night, so he is the headlining fight, so we’ll definitely look out for him.

I know that he uh he he has.

He won the nab, a welterweight title there a little while ago.

He still has it, he also has um.

It might be an interim thing, but it’s uh i’ll check into that.

Maybe we’ll talk about that tomorrow morning and figure that out exactly so we’re going to go over as notable fights now the ones that i was watching earlier on today that were uh some some smashing uh.

I would call smashing endings put it that way.

I watched that one great fight.

So he doesn’t take prisoners.

His kid does not take prisoners, he just wipes you out.

Look out, ortiz is coming for you any on the 20th guys, like i said graeme, you want to definitely come and check them out, eh, nice.

So, there’s a lot of good fights coming up, guys we’re going to let you know about some of them we’re going to continue our prospects thing for the next few days and uh.

This gentleman again is out of texas, so around the world.

If you’re, looking for the best prospect in in texas, the state of texas, united states, look at this guy, virgil, ortiz, jr, fantastic kid fantastic fighter, he seems like a very nice kid as well.

I listened to a bunch of his interviews and stuff and he seems like a really humble kid, so he’s got a pretty good upbringing again his uh.

The other thing too.

I wanted to mention, i believe he has a trainer uh.

So i understand he’s uh he’s a he’s, a he’s, a really really good trainer.

So i’m gon na look into robert garcia as well and see what other fighters he’s he’s dealing with the newer guys and stuff, but uh yeah we’re gon na be talking about the best fighter of new york, maybe tomorrow, graham uh, we’re looking at you know we’re Looking into florida new york, you know the fighters come from everywhere, as we all know guys so.

Um there’s a really good fighter out of maryland.

We’Re just gon na keep uh keep going with the prospects and see how you guys like it.

So let’s hope go for it.

There, virgil right! On buddy, good luck to you in your career, neil, the deal is always uh.

You know i’m always pumping for you buddy.

I really hope you do well.

Let you know any of you guys.

Just do your best.

That’S all! I can say in anything, just try to do your best and that’s it two thumbs up for doing your best and keep the knuckles up, and you know make sure your shoelaces are tied tight too yeah, no kidding you never know when somebody, you know how it Is all righty, so i guess that’s it for this evening, guys uh thanks neil! I guess we’ll talk to you guys tomorrow night at seven, we’ll have another uh prospect.

All right! So have you have yourselves a a nice evening? Stay safe, stay, warm and uh have fun.

Take care of yourselves thanks a lot for coming out thanks neil have a good night. 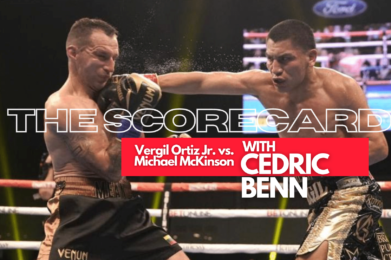