Anthony Dwayne Duncan Yarde is a British professional boxer who challenged for the WBO light-heavyweight title in 2019.

He is featured on Talkin’ Fight today on YouTube or LIVE at talkinfight.com/live Weekday’s at 7pm EST (6:30​ on Fridays) #boxinghistory​ @TheWorldofBoxing @DynamiteDubois
.
.
.
#boxer​ #boxing​ #boxingtalkshow

Hey good evening, everyone here, i am neil the deal nice to see you guys again, thanks for coming out, always appreciate the uh, the uh, the views, the subscriptions, the notifications, the comments, everything’s been absolutely amazing.

Now tonight i understand my uh.

My sidekick graham won’t be able to be with us tonight, so i’m just gon na uh be with you guys.

So, let’s, let’s talk about the british fighters.

We’Ve been talking about the british fighters over the last couple of days and uh.

There’S some big heavyweights, as we all know, that are absolutely amazing, all right, so guys out of all the heavyweights in the world, probably three or four of them are right at the top of the heap right now, which is, it’s always been, the united states in The heavyweight division, but now there seems to be a changing of the guard.

I don’t know what they call it, but uh we’re going to talk about another guy tonight who i’ve been watching out for and he is sick.

He’S got he’s got the potential, i think, to be a world champion again like uh.

Yesterday we talked about daniel dubois and yes, these are the guys that can actually make the difference going forward in the future.

Guys need to check them out and i’m telling you i love them all so guys.

His full name is anthony dwayne yard and his nickname.

He goes by the beast of the east.

Now that is probably in regards to the east part of england, where he’s from, because we’ve been doing the english fighters this week and uh yeah and uh we’re going to talk about that because funny enough he’s from the southern area just like daniel dubois.

So these guys are up to something in in that region.

They both trained at the same gym in their amateur days, and so now he’s he’s moved gyms, but we’re gon na talk a little bit about that.

So he was born uh anthony yard, born august 13th.

He was uh boxing.

He was an amazing athlete.

Apparently he he was basically a professional rugby player but was injured.

I guess which ended that when he was younger, but he was an amazing rugby player, he played soccer, he played he played all the sports and he was really really good.

So then he got into boxing and funny enough.

He started his boxing career kind of late.

For boxers he started at 18 years old, all right.

So let’s go into his amateurs, guys check this out.

He didn’t have a lot of amateur fights, maybe 12, but guess what 11 knockouts in 12 amateur fights right and he idolized mike tyson right as a child.

So that’s a somebody, you know you can idolize as a child, and now he he’s doing the same thing that tyson’s doing he’s knocking people out all the time, it’s big time so scroll through some of the other stuff.

He he’s been boxing.

He was boxing out of the peacock gym in uh in england and guys, like lennox lewis, frank bruno, these kind of guys that that is a world renowned gym like big time now.

He he’s uh training at a at a gym closer to his house in his hometown, uh it ilford, i think it’s called ilford and uh.

I i did a little bit of research about that and box up.

Crime is really cool, because what they’re doing is they’re they’re, giving free boxing lessons free instruction, free uh, everything like uh, they’re they’re, helping the any kids that are under 19 years old can come to the gym, and it’s completely free.

Now that to me is one of the best things i’ve ever heard of it’s, it’s purely free, it’s all in your time and uh.

That is amazing, so anthony god bless you, man.

So we’ll get into his pro totals now.

So that gives him a knockout percentage of like 95 so which is he’s knocking everybody out.

He did have two losses and we’ll talk about those going forward here, but uh and they were very recent, so i’m really hoping that that doesn’t uh doesn’t derail him.

So to speak, because he’s got the potential he’s.

Both hands is, is his ring iq, so they speak is is amazing.

His defense is really good um.

All i got to say is he’s something he’s.

Somebody is somebody who could be in there like there’s a bunch of these guys so keep an eye on him.

He turned pro at uh at uh 18, like i said in 2015, and he had a bunch of titles as an amateur, so we’ll go over, that he won the uh southern area, southern area again light heavyweight title.

Yesterday we talked about daniel dubois.

He won the heavyweight title in the southern area of england, the uk so they’re.

Basically, those guys are from the same area and, yes, they do know each other and yeah they’re working together.

He won the wbo intercontinental light, heavyweight title and he’s been he’s been, knocking everybody out.

Basically, all the way up and he’s he’s ran into a couple of guys in the last year or two so to speak – that uh kind of brought him down to to here.

He’S got he’s going to get in there.

He lost his titles.

He had a bunch of titles anthony and uh.

He lost those titles and then he fought uh, sergey kovalev, sergey kovalev right, which we all know canelo recently knocked him out and uh kovalev is, is a big time fighter, so he lost to kovalev, but that that’s good.

You know he needs to learn.

He’S young and he’s moving up the ladder so well, i’m definitely looking out for him.

His last fight was: was the author arthur fight december 2020? So i i understand that he really wants a rematch uh.

Hopefully, this year he’s gon na get his wish, because uh there’s rumbling that, yes, he could be uh, he could be uh doing the rematch with uh with leiden right.

So i’m looking forward to it.

These guys are are big time.

I’M telling you they’re good, there’s going to be some movement in the heavyweight light heavyweight division in the next year or two, and these are the guys that are going to be uh.

Doing the job so notable fights, i would say for sure, was a yard against uh, sergey kovalev.

That was a big one.

He did lose the fight, but uh he had him.

He had him down in the eighth round and uh.

He didn’t finish the job and then kovalev came back and, and unfortunately he even admitted he ran out of gas.

He knew that he he was fighting in russia.

You know what i mean and he’s fighting the world champions.

So he basically said i got ta knock him out and he gave it his best shot.

But, like i said, he’s, he’s gon na have bigger and better fights coming up soon.

So a couple other ones that i liked was uh was a yard against uh, lyden right, obviously, lyden and uh.

Chris hobbs was a good fight, big time and uh tony everland tony overland was an amazing fight for uh for anthony yard, so we’re looking out for you, anthony god, bless you man.

I hope this year goes well for you.

I know you’ve had some tragedy within your family.

God bless them all.

God bless you and i hope that uh you can get on track and i i personally think you have all the skill you’re, a big bruising, knockout, double cannon kind of guy.

So, let’s uh show them what you got neil the deal always be supporting you thanks a lot talk to you guys later always subscribe like share whatever you guys want.

I’M all good, we’ll see you tomorrow, seven o’clock, thanks for coming out guys 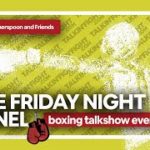