Talk a little bit about some rumblings about these.

All these old timers are coming back so uh to to fight.

So i heard about a a couple of new ones.

So all right guys well again, thanks for coming out thanks a lot for the likes, the shares, all the stuff everything’s been really fantastic.

We’Ve been uh, we’ve been really having a great time with it.

So i hope you guys are going to like this one.

I really like this guy so tonight guys we’re going to talk about jermell, charlo jermell, all right, so he has a uh nickname.

They all call him the iron man or his buddies and uh.

The boxing community calls him iron man, so he he’s a fantastic fighter.

I really like him and uh we’ll go over a bunch of his stuff today and we’ll see uh we’ll see how, if you guys like him or maybe not we’ll see how it goes so anyways he was born, may 19 1990.

That makes him 30 years old.

He was born in lafayette louisiana, but i understand he grew up in houston, texas, okay, he also has a brother who is a professional fighter and they are identical twins interesting.

His name is jamal and they’re best buddies.

So if you want to check out jermail or jamal check them, both out they’re, really good fighters tonight we’re going to be talking about uh jermell, so jermell’s career started in 2007 and he is actively a present fighter he’s in the light.

So that’s it’s interesting how they all have to be different.

I don’t know why they just can’t uh just have one division and that’s that so, but i guess they all want to be different.

So presently jermell is ranked the best active light middleweight in the world, which is an amazing uh accomplishment in himself he’s uh he’s been fighting uh very, he started very young.

His father uh was a pro fighter and uh.

He got both boys into the boxing game and they’ve.

Both excelled right up to be both becoming world champions.

So that’s a the fighting has come right from right from dad all the way up and uh.

Obviously, they’ve been doing something right because they’re both world champion.

So i really like, both of them guys check them out.

Both these brothers and uh we’re gon na talk a little bit more about jermell today, so he’s.

Currently, he is currently the unified light middleweight champion of the world unified, holding the wbc, wba, ibf and ring magazine titles.

So he’s almost got him right across the board other than the wbo, but the double wbo does not.

Uh is not really recognized as part of the unification, i think it it should be, but apparently they don’t uh.

They don’t believe that it’s, it should be part of a unified, uh title situation.

So that’s interesting uh he had a great amateur career.

He had 64 fights total, which is quite a number of amateur fights.

He had 56 wins fantastic with only eight losses so that that in itself is a really really good amateur career and uh.

He’S he’s been a champion from a very, very young age, so we’ll go into his pro totals now.

His pro totals are, he has 35 total fights of which he has 34 wins.

That gives him a knockout percentage of 51 percent.

He does have power in both hands.

He really does he’s a very, very aggressive fighter, which i like about him.

He uh he he cuts off the ring really well.

He uses he uses everything in there to his advantage.

He’S got he’s, got good footwork.

His boxing iq is really high, but um.

He definitely uses uh uses his jab well and he’s got power, like i say in both hands, even though he only has the 18 kos.

Some of his knockouts are are really really flashy.

Knockouts so and uh he’s gon na be uh having some fights hopefully later this year, and then we’ll see him again.

So following uh in 2015, he won his first uh light middleweight title of the world, and that was following the retirement of floyd mayweather jr.

Basically, they had a it was vacant and he won the title in 2015.

and just recently he had a fight and he won the unified title by knockout over justin rosario.

So that was a really good fight that uh that he took those three belts, uh from rosario, of which he had the wbc belt already so now he has the four belts now, as far as i can see between him and his brother they’re, both real his Brother is undefeated as well, so they’re, both very, very, very good uh boxers uh, the the one thing that i’ve noticed going forward is he’s having a hard time.

He he really wants to get a big big fight together.

Now he doesn’t want to move up in weight category.

His brother recently moved up to 160 and he’s not going to be fighting his brother they’ve, always uh said that they will never fight each other, so um they really look out for each other.

Basically, they’re they’re best friends, so i don’t know if, if he doesn’t move up uh in categories he’s basically fought most of the guys.

At that level i mean canelo’s moved up.

The big fighters have moved up in weight class, so the one guy i was looking at, though that could be a potential opponent this year for him in an upcoming uh title fight would be an a former unified champion himself and that would be jared.

Hurd jared hurt, so i i’m he doesn’t like.

I say he he doesn’t really.

They don’t really have a plan for him as of yet, but i’m going to keep my eye on him and i hope you guys do too he’s he’s talked about manny pacquiao and all these different guys in canelo and stuff.

But i really don’t think that’s going to happen in the in the near future, but maybe a fight against uh jared hurd might be something that might be in his uh in his wheelhouse.

So the uh notable fights that i watched recently that i’ve see i’ve seen him in over the last few years that i really liked was uh charlo versus demetrius hopkins, fantastic fight, charlo versus uh, charles hatley.

He had a fantastic knockout in that fight.

So if you want to watch that charles hatley uh charlo versus austin, trout and uh tony harrison, he fought tony harrison twice.

Those fights were amazing.

The one loss he did have was the first fight against tony harrison but uh.

He revenged that in a rematch and uh won his title back and then recently he fought uh.

Like i say, september 2020, he fought jetson rosario from the dominican republic and uh.

He won the fight, an amazing uh funny like crazy enough.

It was around the eighth round and he threw a body shot that uh basically knocked rosario on his back and rosario was having a really hard time breathing and getting up, and so that’ll tell you you know his body punching is is, is improved immensely over the Years so he’s he’s the whole package he’s a unified world champion uh, like i say he he’s been calling out guys, but nobody seems to be taking the bait and they can’t really find him at anybody.

A big big fight, but we’ll see what happens.

Hopefully he fights uh later this year and i’ll definitely be looking out for him, and i hope you guys will be too so thanks again for uh tuning in really appreciate it.

Take care of yourselves tonight we’ll have yourself a good evening and uh we’ll talk to you tomorrow: 7 p.

So thank you very much and have yourself a good night. 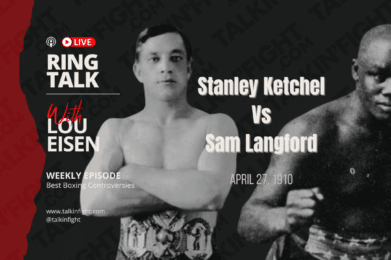