Watch TalkinFight with Neil the Deal and his profile on heavy hitting Ernie Shavers on YouTube or LIVE at talkinfight.com/live Weekday’s at 7pm EST (6:30​ on Fridays)
.
.
.
#boxer​ #boxing​ #boxingtalkshow

Hey welcome once again to another edition of neil the deal on talk and fight, and tonight we’re talking ernie shavers.

What do you got for me hey good evening, graham, how are you tonight it’s nice, to see you as usual you’re, looking good, i’m feeling good everything’s good.

Thank you very much guys for the likes.

The shares the comments.

All the great response has been absolutely overwhelming.

I am completely blown away by this graham, and thank you very much to all of you all of you, the fans for neil the deal the shows are getting bigger.

The shows are getting better and will always ensure that we will bring you the best of the best that i can give you every day of the week, all right.

So, graham, today we’re going to talk about a guy uh who was uh around in the 70s uh.

When i was a child, i used to watch him a lot.

You know he was fighting the biggest and the best of the day and he was uh.

Basically we’re gon na let everybody know that he was uh called the toughest hardest puncher in the history of boxing all right.

That gentleman’s name would be mr ernie shavers all right: ernie chambers uh.

In garland alabama all right, his career was a.

It was a very long career, guys.

He was one like i say, probably the known as the hardest puncher in the history of the game, all right.

That’S an interesting one: how about the acorn? Graham, you know why they called him the acorn ground, the baby oak tree, okay, no because he was bald, so he was like he looked like an acorn.

I guess you know what i mean guys.

He he looked like an acorn, somebody called him, the acorn i don’t know and uh the other one was puncher of the century so because he was as you guys can go and watch he’s probably the best hardest, toughest puncher of all time in the history of Boxing so he had a an interesting career, graham uh.

He fought twice for the world title, but he lost both times all right.

He was known by far again as the hardest puncher and uh.

Graham, that’s incredible, who knocks out 68 guys in a career right, so i believe he had like something like 89 fights, but he uh knocked out what 68 out of 89.

That is a serious situation with that guy.

He would, like i say, he’s the hardest puncher.

You got rocky marciano, you got mike tyson, you got these big.

The glitch goes, these guys are throwing the bombs.

So you guys guys need to go out there check out, like ernie shavers versus ali.

All right bought him twice.

I either bought him one.

That’S pretty impressive, fernie right uh! Most of his most of his fights originally were with uh within three rounds, so out of the 68 knockouts, graham 46 knockouts were within the first three rounds, which is which is will tell you how much punching power we actually had uh.

He was absolutely devastating uh.

He come at you, i remember him.

He had a very sort of compact style uh.

He came at you really hard and he throw the mega bombs and uh.

He fought the biggest and the best of the time uh.

He had 23 first-round kales, which is amazing.

You know what i mean graham 23, first round kos wow, that is crazy uh.

You know what i mean like: he was really close every time and he and he fought the biggest hardest baddest.

He did them all.

You know he fought and beat five world champions.

Graham right, so he didn’t win the championship himself, but he did beat five world champions, which is which is an interesting stat, really to me right if he’s beating guys who were the champion, but he never was the champion.

That’S that’s an interesting stat to me.

He’S got uh 14 losses in his career, one draw and he won 44 of his first 47 fights all right, 27 consecutive and chaos in 20 consecutive fights.

So that will tell you what kind of a monster this guy was like.

He literally annihilated the competition until he got to guys like ali and uh fraser and got you know foreman, those kind of guys.

So he he’s absolutely amazing uh.

All right, uh he’s been spending his time being a special guest at uh boxing functions, conventions that sort of stuff doing signing, autographs that sort of thing and uh.

He became an ordained minister actually and he’s been practicing uh ministry for quite a number of years.

So you got ta.

You know thanks a lot ernie, i loved you when i was a kid.

You were right there, buddy and guys again, thanks for the likes the shares, all the uh subscriptions, all that kind of stuff check out, ernie, shavers fights he’s got some big ones like real big ones and, like i say, he’s the best puncher of all time now.

That’S why he retired.

Apparently he got a retinal injury to his body and it affected his vision and affected his ability to uh perform at the level that he was performing at so he decided to pack it in.

I guess right and he had 89 fights.

So he probably decided himself that uh, you know you know, mother time caught up with him.

So ernie thanks a lot love to hear from you.

If you got anything to say ernie or any of your friends out there, the neil the deal showed love to hear from you and guys.

I want to thank you again.

Every day, it’s getting better and better.

I know that i promised you: we’d have sid vanderpool here.

Did i not cram today? I want to apologize for all you guys, i’m sorry, but sid called the producers and explained that he wasn’t able to come in and obviously we uh.

We want to make sure that sid’s, safe and happy so apparently he might come in in a week or two we’ll just uh.

Let us know yep all right.

So thanks again guys, god bless you all.

I really am blown away by oh, and the leaves tonight right.

Montreal, apparently we’re playing montreal is that true, that’s absolutely right right! Is that game one of the season ground, that’s green game number one! This is a real game.

Now this accounts for points and stuff yep all right, fair enough.

This is toronto, maple leafs all the way to the cup.

Let’S go boys! I love you you’re my favorite team, since i was sperm.

If you go to our talk and fight.

com website, not only see the show uh, but we’ve got a contest running where you can wear these.

When these boxing gloves back here, uh we’re giving a pair away for the next uh seven weeks got seven pairs giveaway there.

I guess neil absolutely graham absolutely i’ll, be here guys again thanks a lot continue all the uh, the great stuff you’ve been doing for me and the boxing community please uh subscribe.

Please make a comment once in a while, if, if you have anything to add or any suggestions or anything that i’m sure the producers will will look at it and we’ll uh we’ll address it appropriately and we’ll definitely god bless you all.

Thank you we’ll always be there for you.

Thanks a lot kneel the deal out.

Be the first to review “Talkin Fight: Neil the Deal” Cancel reply 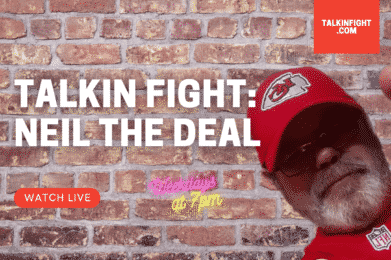 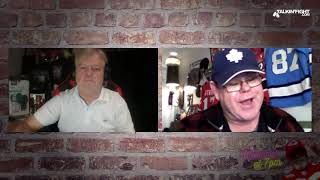