This one got cut short, so it’s Part 1. Neil the Deal is profiling the great Vitali Klitschko and Wladimir @Klitschko on YouTube or LIVE at talkinfight.com/live Weekday’s at 7pm EST (6:30​ on Fridays)
.
.
.
#boxer​ #boxing​ #boxingtalkshow

Hi there welcome once again to another edition, talk and fight with neil the deal tonight neil’s going to profile.

Mr klitschko, let’s go, let’s do it hey good evening, graham, thank you very much for having me.

I really appreciate it as usual.

Thank you very much guys for tuning in wow the uh response.

Again it just keeps getting better every day.

That’S what i think anyways you guys are awesome.

Thanks for the likes, the shares, all the stuff you’ve been doing for us, the comments the subscriptions have been fantastic guys.

Thank you very much for everything, and you know what i couldn’t be here without you.

So i appreciate everything you do for me and i’m trying my best for you.

So uh we’re gon na talk about a guy tonight, graham we uh.

We were talking about him a little while ago and uh.

I watched him fight exclusively uh in the basically the early 2000s and uh.

I think he may have started in the late 90s or something, but we’re going to talk about a guy that i personally used to call the russian cyborg.

I don’t think he really had that moniker, but that’s what i called him, because every time i saw this guy fight, i thought who the heck would be crazy enough to fight him.

He was just unbelievable.

Every time he came out, it was just.

He didn’t really have much competition for many many many years.

So i’m going to talk about a russian guy.

His name is vitaly klitschko, that’s klitschko all right, so they called him dr iron fist, that was his uh his handle from, i guess the fans iron fist.

He had fists of iron for sure i saw him knock guys out like it was it just.

Nobody could beat that guy right and uh.

I thought he was amazing and he’s really big like he was a really big heavyweight uh in size, so he had an advantage over a lot of guys because he had the reach he had the height and he had the skill.

So with that combination, i don’t know that’s why he was the world champion heavyweight champion for so many years, because guys would come at him, and you know how the russians are graham they’re, uh they’re trained in a different uh style.

I would say um.

Well, that’s that’s! That’S! Worse than being, you know in a training for a boxing match, so most of these guys were military guys because it’s mandatory for them to do uh military service, and then they just catapulted their uh their talents into becoming boxers or uh olympic athletes or whatever they Became so you definitely wanted to win for the russians at any all the olympics, because if you didn’t win when you got home wow, you had a bit of an issue because they don’t like losers in russia.

So the russians were a serious team on every level um every time they fought and uh.

I i i just thought they were really sort of what oh, no not again point of clarification, though mr klitschko is actually ukrainian but uh.

We won’t tell neil we’ll keep it to ourselves.

Well, he retired a few years ago.

Wonder if he’s coming back, wonder if you’ll be part of uh iron, mike tyson’s uh hello come on neil come on back to us if he doesn’t come back to us soon.

What am i to do here? He actually held the uh mr klitschko held the world heavyweight championship twice, including the wwba ibf wbo ibo, and ring magazine titles born in kazakhstan.

I did not know that.

Here’S a good fact how much is he worth vladimir’s worth? 90 million dollars wow and established himself as one of the best heavyweight champions of all time.

As neil was saying, let’s uh, let’s switch gears here and while we’re all here, let’s uh, let’s end this call and uh and go straight into uh christian’s uh episode on uh the upcoming olympics.

How about that stay tuned, uh we’re gon na go straight into uh.

Let’S just open up my producer, shall i leave see what the producer says, because i guess we’ve lost neil all right, so we’re gon na we’re gon na start uh streaming christian who’s got a great little episode on how to go from your couch to the ring.

Uh in the olympics, um, we had him on earlier and put it in our catalog and for a situation such as this.

Let’S air it now, oh by the way fans we are indeed giving away these gloves.

Uh hope you got yours.

I’Ve got a couple left.

I think you can still enter if you go to talkandfight.

com, find the contest and enter it. 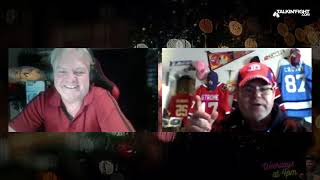