The second boxer is Karriss Artingstall, an English amateur boxer. She won a bronze medal at the 2020 Olympics, silver at the 2019 European Championships and bronze at the 2019 World Championships. She is a gunner in the Royal Horse Artillery. Her partner is middleweight amateur boxer Lauren Price.

Thank you once again for joining us for another episode of nut club featuring mike core uh, cedric ben, i believe, is tied up.

So you have to deal with me staring at your screen.

We have to do.

Yes uh, you know, graham, you might as well announce who we’re doing today, since you did it.

On monday, we being female friday, we have uh two, my female uh female favorite fighters.

Out of great britain, team, gps, uh lauren pricing and carlos arden stall yeah, these girls are wonderful and i’m glad the boxers picked them up and uh does.

After you’ll conclude our show.

It’S like it’s, not a history lesson from back in the day, all right, all right, yeah, so anyways we’re talking about lauren price and curious, argental and uh yeah.

So miss price is a welsh amateur boxer and former kickboxer and footballer while representing whales.

She surprised or surpassed this achievement by winning gold in the 2018 commonwealth games, followed by a gold at the 2019 world championships and while representing great britain, she won gold medals, gold medals at the 2019 european games and the 2020 summer olympics price also played football for Several years with cardoff city winning the inaugural season of the welsh premier, women’s football league in 2013 and having captain wales at under 19 level, she made her senior debut in the 2012 in 2012.

She gave it up playing football in 2014 to focus on her boxing career, so you know she’s a very highly decorated, amateur and uh.

You know just coming off this wonderful pass: gold, it’s great and uh.

Price was born in newport wheels but grew up in uh midair highly decorated, where she was brought up by her grandparents uh.

She attended a a school in bargood uh.

She she showed a keen interest in several sports, taking up football, netball and kickboxing at the age of ten and later after encouragement from her grandfather as a kickboxer price won a silver medal at the world championships event in athens in 2007 and at the age of 13, competing against opponents twice her age and became the youngest ever competitor.

In the british championships she went out to become a four-time world champion six-time european champion in the sport and later competed in taekwondo.

So that being said, let’s talk about well.

Boxer boxer has signed her along with sky sports.

She is a gunner in the royal horse artillery and her partner is middleweight.

I did say it lauren price and her lady, ms earning stall.

Uh their pair, who are a real life couple, have not only have not boxed since tokyo and uh.

You know, honestly, both these women are set to make their pro debuts later on this year, honestly, two quality fighters, two great ladies um – and you know what we just found out – that you know they’re a couple: they bought a house together and uh.

You know what it’s great after buying their house and returning from the olympics.

You know price being a former kickboxer and footballer who you know: who’s won all these golds and world championships.

You know she’s multi-talented and multi-talented and has been capped over 50 times for the whales, women’s football team uh and you know, and winning all these kickboxing world titles as a teenager and giving up all that in 2014 to become.

You know focused on this boxing and you know becoming a big part of team gb and honestly.

I can’t wait to see this girl kick it off later on this year and uh.

You know we get to see her fighting these paid ranks.

I agree with you: man.

There are two quality fighters to be honest, very skilled.

Yes, they are they train together.

They work hard together and honestly, you know, boxer box is doing it right.

Man all week, we’ve been talking about ben shalom boxer and how they’ve been signing all these great prospects coming out and honestly they’ve done.

I don’t know if you you know you know about these.

Ladies, don’t you i do uh when we’re covering the olympics, uh christian.

I would talk about them quite often because they were doing quite well, quite frankly, um, as were quite a few of the team gp members so uh they came up from conversation quite often uh, but i i until today did not know that they were uh partners.

Yeah, so that’s that’s the way it’s working man, they are partners, they live together.

They push each other hard uh.

You know, fellow olympians and um now now both being signed to uh, boxer man and uh.

Now both uh starting to embark on their on their paid their paid journey through these ranks.

You know they return to great britain, both with uh.

You know boxing medal winners um now we know they’re also a couple and part of team lgbtq and on august 9th the day after the end of the summer, games are installed posted a picture on instagram of the two of them holding their medals arm wrapped around One another with the caption about their home, which was who would have thought that when we brought our first house together a couple of months ago, we’d be bringing back two olympic medals to it.

And you know what yeah, who thought that.

And you know what these.

Ladies very deserving of those medals, very skilled fighters, as carl has mentioned out, and that i am telling you guys and that we have all seen and watched and they have entered the pro rags and and we’re gon na see them soon so guys be on the Lookout for these two women to make their pro debuts later on this year and uh.

We will definitely let you know when those fights are gon na happen.

You’Re not gon na want to miss it.

Both these, ladies, are very skilled man.

Uh they’re gon na do great in their in their respective divisions.

You know lauren price uh, i believe her amateur record was 46 and 15 and you know she’s uh, a five five and a half southpaw.

You know from the united kingdom and she’s uh she’s gon na bang, it out man, she’s uh she’s, definitely in a great division, um to uh to to get some great competition.

Man and honestly, her skills are gon na get tested and uh.

Hopefully she comes out on top.

I believe she’s gon na do well um ernesto 25 and seven she’s, a featherweight division and uh yeah, not another girl.

We can’t wait to see her in those programs, so they will make a move quickly through the ranks.

They will be looking to push these.

Ladies, really quick up through those ranks and uh.

Honestly, i can’t wait to see it so guys.

You heard it here, man mike or at four with my man, graham boyce, the patriarch of the team, bringing you another couple of girls for female friday to know.

Let you know all about that.

Don’T forget to join us tonight.

On the panel there’s gon na be lots to talk about.

We got ryan garcia returning back in action this weekend, so definitely make sure you tune in tonight.

Man you’re not going to want to miss the big talks about that.

This channel tonight, until then we’ll see you next time.

It’S your man mike or at four i’m knuckle up, bringing you the youngest hottest, undefeated undiscovered prospects from around the world, and the only show out here doing it. 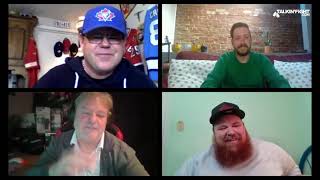