Carl Jammes Martin | Knuckle Up with Mike and Cedric

What up my talking fight fans, thanks for tuning in to today’s episode of knuckle up with yours, truly might or, and today we are talking about the philippines, and we are continuing on with another great boxer coming out of the philippines, who has just inked a deal With pro bellum guys, i want you to be on the lookout for this kid man.

He is a filipino for professional boxer.

He currently held the gab super bantam title since december 2021 and the wba asia superfly bantam title since march of this year and martin currently trains and fights uh logo and honestly guys this five foot six 23 year old southpaw is sporting, a record right now of 19, wins no losses with 16 of those wins coming by way of knockout, and he goes by the wonder boy, and definitely let me tell you about this kid man when you watch him get in the ring.

He definitely is that he’s got great great hand.

Speed man he’s got power for such a small guy man super bantam.

We are talking about guys that are 120 to 125 pounds around there and he is coming off uh, probably his uh biggest challenge to date.

Uh the fight was back march, the 12th.

This is, this is where he won the vacant.

Also on the up for grabs was the pga, which is the philippines game and amusement board super bantam title, and he took on ronnie baldonado, who was 15-2 at the time of this fight going into it, and uh carl suffered his first uh knockdown of his career Man, martin was down twice or sorry down once in round two and came back with a wonderful victory, uh tko in the 11th round, if you guys haven’t seen it but be on the lookout for this kid he uh he’s now signed.

You know he’s inked a deal with pro bellum and um.

You know, martin is the happiest uh with his most recent win.

You know uh coming off that big one of his career and guys we’re gon na get to see this kid again.

Man, uh he’s definitely trying to use pro bellum uh to help uh push his career to where he wants it to be, and that’s uh.

You know he follows fellow countrymen in iconic boxing names like nanito de nair and donnie nietz uh in signing promotional deals with the global boxing promoter that launched last year, the hard hitting martin known as wonder boy challenged for that vacant.

Wba asia super bantam title and he won it.

You know problem is also.

They believe man um their patience, is paid off within joining for bellum, and carl martin here believes that pro bellum can do uh great things for him and uh he’s he’s all about riding that upright hill.

That pro bellum is on right now.

They’Re definitely signing up a whole bunch of guys uh.

We did profile a couple of them this week that are also simon, pro vellum, so you know they’re doing big things, man in the world of boxing and guys.

This is one of the faces that i want.

You to get out there and watch uh.

You know this kid.

He definitely is a force in the ring man for such a small guy to be he uh.

You know knocking people out at that weight and uh.

You know such a great, a great knockout percentage.

His trainer is abel martin, who is his father uh he’s managed by his sister uh jing martin.

So you know it’s uh, it’s just one of those uh kids that you got ta be on the lookout for in the future, he’s definitely going to be doing big things now that he signed with pro bellum and uh.

You heard it here, man with mike or at four telling you about these, philippine uh these philippine fighters, who are definitely young, hungry, undefeated up and coming uh.

You know martin here he is now ranked number two out of 43 in the philippines, at the super bantam and he’s now ranked 15th out of 120 or sorry 1223 in the world uh.

So this is one of those um.

You know one of those big um.

You know smaller weight class uh divisions here that has some great exciting fighters, and this kid is definitely one of them to be uh coming up here.

You know he’s sitting at 15th right now in this uh in this category and uh.

We need to get them in front of some of these fighters that uh that i just mentioned, and he can definitely hold his own.

You know he’s got great rings.

You know he’s intelligent in there and definitely has a chin on him, and you know what it’s about um guys.

I want to touch base uh i just want to.

I want to just give a shout out here to um.

What is it sismo, uh from south africa? You know uh rest in peace man at the 243 of the 10th and final round of his fight.

His opponent fell through the roof.

The ropes uh appears to lose his understanding of the present situation.

Apparently he suffered a blame of a brain bleed and he was taken to hospital put into a coma and unfortunately, he has passed away and uh succumbed to his injuries.

So our our thoughts and prayers are with uh him well with his family.

It’S it’s a sad thing that happens in boxing um.

You know he was winning the fight up until the situation was happening, and it’s just unfortunate that this is uh.

This is a the thing that happens in the sport.

These guys take their lives into their hand.

Every time they step into that ring and uh.

Unfortunately, this is one of those times where um, where one of them is not going home and uh.

You know our thoughts and prayers are with his family, shout out to uh him for the great uh great performance.

He put on just before it happened.

Well guys, you heard it here, man, my core at four, be on the lookout for carl james martin just signed a problem uh coming off his first fight after inking that deal winning the wba asia title uh super bantam guys check him out.

He will be fighting in the future, he’s definitely going to be a busybody, and you know what he’s in a really exciting division he’s fast, hard-hitting, little knockout artist, man so guys we’ll see you tomorrow same time same channel new prospect.

You know what it is i’ll see.

You then knuckle up. 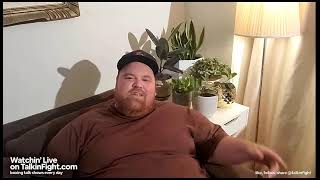