Boxing with Bola | The Scoop with Bola Ray | Talkin Fight

Watch The Scoop from Monday to Friday featuring Canadian heavyweight champ Bola Ray, who lends his vast experience in the sport and provides his comments and analysis on boxing, on YouTube and TalkinFight.com/live. #boxinghistory​ @archiemoore #archiemoore
.
.
.
#boxer​ #boxing​ #boxingtalkshow

Hello there talking fight fans around the world.

Thank you once again for joining us for another episode of the scoop featuring the champ bola ray and his ongoing series exploring the history of boxing and great boxers and great fights and great fighters.

This is one of the tallest boxers um, if not the tallest uh in his day, in which he was six foot six.

When crickets were uh well, aplenty, so uh he was a multi-talented entertainer um in that.

Not only was he a musician, but the musical gene ran in his family um.

Raymond olive wally – and this is the scoop i’m going to assume that prior to the 1940s that the most popular part, our families saw that uh having the most kids is a sign of wealth because um they or else they just didn’t, know what birth control was.

Mississippi was one early terrell.

The family moved quickly to belzone mississippi, but shortly after his birth, they moved against the big city of chicago, where his sharecropper father got a better paying job.

I guess in the big city, in the factory and uh onwards and upwards per se, um ernie won the uh chicago golden globes as an amateur, but outside of that those wasn’t very much information as to his amateur career um.

With that being said, uh may 15th ernie may 15 1957, that is, uh ernie was stepped into the squared circle.

For the first time as a professional, he had a string of successes um which led up to his ninth fight, where he sustained his first but questionable loss um to one johnny gray.

In an eight round.

Split decision now only had taken the first three rounds in this fight on all three scorecards.

It’S just the last five rounds is what got questionable and uh yeah um come the uh.

The rest of the fight was questionable, but a lot of people saw that ernie got robbed on this on this card.

He added another rematch against johnny um and the same questionable result ended in an eight-round split decision.

His crew moved forward and he got past this disappointment.

He put together a string of wins and like an actually extensive uh win streak only to to lose a majority decision to one wayne bethu, nothing to be ashamed of, um still an impressive career to date and on his 28th fight he runs into none other than Cleveland williams and sustained his first crushing defeat in the way of a seventh-round knockout.

Now this was this fight is then avenged, some seven fights later um way of a tenth round split decision for ernie terrell.

It’S still a respectable a respectful witchcraft career ernie continues on with his career with a great a great deal of more success over well notable fights over future uh, well light heavyweight god, king, if you want bob foster and none other than um yeah, our very own.

George developed so yeah he was a decent fighter to say the least, if not great now, this is where it gets.

Interesting may 29 1966 earning troll was to face off um against none other than muhammad ali, but six weeks prior ali’s draft qualifications changed at which point time he was now eligible to be sent to vietnam now, at which point in time ali made one of his Most famous quotes of i ain’t got no quarry a quarrel with no vietcong.

This was as popular as a drag queen in a tractor.

The attorney general of illinois found so dusted off his books and found some obscure law from god knows where, which then [ Music ] found any fight.

That ali was to be in be deemed illegal, at least in the state of illinois.

Now, with that bob arum scrambled throughout these all 50 states trying to find a state that would actually sanction this fight against him and ernie terrell, at which point he couldn’t find one bob arum, had then to go all the way up to canada and montreal finally Said yeah we’ll take that fight at which point by that point in time, ernie trail was no longer interested.

That’S the part that most people didn’t know, including me.

That fight was only taken on 17 days notice and it went 15 rounds now.

Ernie tyrell then went on to actually fight um, none other.

Oh sorry, ollie was stripped of this title um for choosing a rematch against something listening.

Instead of fighting enemy terrell for the wa title, ernie terrell ended up fighting his one eddie monk match on march 5th 1965 and won the wba heavyweight title via 15 rounds.

Uh round decision, so the wba was with ernie, the wc was still with muhammad ali and then things got interesting march.

The fight was set.

Now this fight was to answer who was the legitimate heavyweight champion of the world? At the end of the day, there are two champions here, but no one really gave ernie the respect due simply because muhammad ali did not lose the title in the ring he it was stripped from him.

So it was almost as if ernie got a gift and ali was always seen as the actual champion now um.

With that, the lead up to the fight was nothing shy of epic ali does what ali does and oh what a firestorm ernie refused to [ Music ] acknowledge ali’s name of choice, muhammad ali and call him by his birth name.

An uncle tom, actually, he went a hell of a lot further than uncle tom.

That was going to get his ass whooped and i was like okay in another press conference, ernie called him ali cash’s clay again ali slapped, ernie told the public.

You want to come and see this fight, because i’ve never wanted to beat somebody so bad as i want him now.

This fight began and finished with ernie, just getting one hell of a shellacking.

It was just it was nothing shy of epic um.

The only thing i can give him is the fact that he didn’t go down.

Um he’s finished 15 rounds on his feet, but he just took a beating for 15 rounds um, partly through the fight uh ali was going off and just peppering him with jabs, but in between he’d tell him.

They reported that apparently ollie grabbed him in a headlock and ran his eye along the top rope with the headlock.

Was this professional wrestling or professional boxing ollie was firing on all pistons that night and it made the verdict easy in one side.

As far as i was concerned, even though he did win the world title and whatnot um, his fight with ali showed exactly how monolithic the man all he was, even though ernie was rather great in his own right.

But i mean only was just a step above um after this fight, ernie had another 11 fights and um.

Not he didn’t have too much like he didn’t, have anything called notable success past this fight um in 67 ali was then banned from fighting um for three years.

Uh his titles, the wba, held a an elimination tournament um to see who was going to be ollie’s successor with the belt and terrell was tossed into the mix.

He didn’t get very far.

I think he lost in the first round um he had like.

I said 11 fights nothing to write home about and then he retired um with that i um september 10.

He then went back to his other love, which was music and became a music producer uh.

His sister had long left the supremes for the record jean terrell, because many of you remember um.

He died in chicago at the age of 75 in 2000, well december, 16, 2014 um of dementia was unfortunately a common occurrence um and a common ailment in past fighters.

From that generation, when they fought some wars and they would fight frequently without taking time to heal properly now um, he wasn’t genuine.

He was a genuine great of the day.

It was just muhammad ali.

Was that much better? Hence why he is the greatest but um, and with that that is my show for today um, if you liked it, please hit the like button and subscribe and smash that notification bell.

It’S a boy baller and that’s a scoop thanks very much for that’s amazing.

You know what’s interesting about that.

You hear often and haven’t lived through that era.

I would say i heard often muhammad ali being angry and spoke angrily about something okay, but i never ever.

I didn’t see that fight, but i so i never imagined him being mad, as in he’s so angry he’s gone over the top and he’s now mad, like so sort of sort of dragged ernie across the ropes, excellent graphic description of how absolutely mad muhammad ali was.

He got under his skin, it’s not a good place to be right.

No, that’s not someone who you want to piss off.

Did he pay for it.

Did he pay for it right in classic fighter fashion, yeah right on thanks very much ray and uh, we’ll see you tomorrow, night fantastic, tell the viewers out there.

If you’re going to subscribe, hit that notification bell and get our notifications regularly when we’re up next, thank you very much.

Have a good night 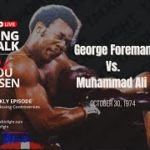 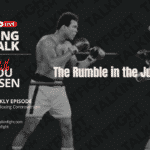 Rumble in the Jungle | Ring Talk with Lou Eisen 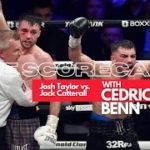