Herbert Lewis Hardwick Arroyo a.k.a. “Cocoa Kid” was a Puerto Rican boxer of African descent who fought primarily as a welterweight but also in the middleweight division. Hardwick won the World Colored Championships in both divisions.

Watch The Scoop from Monday to Friday featuring Canadian heavyweight champ Bola Ray, who lends his vast experience in the sport and provides his comments and analysis on boxing, on YouTube and TalkinFight.com/live. #boxinghistory​ #kennorton
.
.
.
#boxer​ #boxing​ #boxingtalkshow

Today, i’m shedding some light on another one of the black murderers, rome, fraternity members.

He was the only african-american of the group that was also of spanish descent being puerto rican by birth because of his affiliations with the fraternity.

He too never fought for the world title but won the world colored welterweight and middleweight title in his short life.

My name is bulla raymond olugwali, and this is the scoop born, may 2nd 1914 in mayaguez puerto rico.

The story has that his father was an african-american merchant marine named lewis hardwick and was stationed there, but then on a leave for a few months only to return to find out that his lady maria wasn’t just pregnant but had a child for him waiting for him.

Then tragedy struck during world war.

When the when the father’s ship went missing the uss cyclops and was never found still to this day, there’s no there’s no fighting over anything.

They still don’t understand what happened, and this was the largest loss of life in u.

Without there being combat shortly after world war, 1 ended tragedy struck the family again with maria passing away so young herbert lewis hardwick, which is what his father named once.

He moved over to atlanta ended up having to move to live with his maternal aunt.

Antonio arrow robinson, her husband was edward allen robinson and he was noteworthy because he ended up becoming young herbert’s first boxing coach, when he was 14 years of age.

There’S not much said about his amateur career, maybe because it only lasted a year.

He turned the boy pro at 14, at 15 years of age, okay, 1932 herbert was fighting in west palm beach and the connecticut state senator henry durant was in the audience.

Mr durant was so impressed with herbert’s ability that he sponsored him to go to a training camp up in new haven and, from this point on herbert was known as the coco kid all these names herbert found or fought under a few different names, mind you um Moving forward from this point on um lewis, hadrick different spelling lewis, that is um louis arrow or where oh, i sort of like that one, but he got his license under louis hardwick arroyo now, due to lewis being part of the black murderer’s call uh role fraternity.

His opportunities to were limited when it came to dance partners, so he ended up fighting other members of the fraternity several times over.

This was never more prevalent than his series with holman williams, a sensational fighter, who only been beat like stopped by two people and herbert was one of them um.

He fought him 13 times beat him.

He went on, he fought um, he went and fought charlie burrow three times.

One loss one draw and one no contest like yeah, mind you.

He and he ended up.

Fighting um won eddie booker once but was victorious, but the bottom line still remain.

Is that all of these fighters so as they can get paydays and somewhat sustain themselves? They had to fight each other? It was said that even the great rey sugar ray robinsons to clear the league group in 1943 rey’s handlers made the claim that ray is going to do a tour through california and he’s taking all all-comers.

Only to for ray to find out that the murderer’s row was in california at the time and they’re staying there for the next couple years, doing a tour too for him to actually personally pull himself up on that tour.

Kid kaplan was a world featherweight champion who lost his title 1927, but faced off against hardwick in 1933 and suffered a loss for his efforts.

In 1936, the world colored welterweight title was created in july 26 of that year, hard work was set to dance against none other than the pacific coast and mexican lightweight champion.

Peter jackson in this ten round contest hardly stopped him in the second.

It was just like hardik went on to successfully defend that title four times: um, even a title again against his old nemesis holman williams, um, where they fought a close fight but or again uh.

How do it won the fight? But what i found notable about that scenario was that ringside magazine actually donated the belt for it 1940 september hardwick was ranked the number one wealth weight in the world, but henry armstrong, the recognized welterweight champion um, refused to fight him under any circumstances.

The world colored middleweight title had gone dead also, but armstrong knew that there would be nothing left of him if he gave hardwick work an opportunity, so he just ran.

Hardwood was on the cover of knockout magazine.

You go boy, hardwick lost his world title uh, world colored, welterweight title to none other than charlie burrell who, upon winning the strap, never defended it in hopes that armstrong would actually grow a pair and give them a crack at the recognized title for the record.

It didn’t happen, 1943 opened up with yet another dance between hardwick and holmen, but this time it was for the world colored middleweight title january 15th.

The dance was on where hardwick won again.

Another close 12-round decision upon winning the strap hardwood, never defended it, but met met up against williams.

He had another dance in 1944 for with hard work’s, second fight since being discharged from the u.

So i got i messed that all up in 1944 when he fought holmen a second time.

It was for another belt, called the duration belt duration, middleweight title, which another belt that went nowhere and it was not recognized globally.

So, coming to the end of hard work’s career was a controversial fight that took place in november 24 1948 against one oakland bill smith.

Oakland was our hard work, was a 2-1 favor going into this contest um.

But when the investigation was done, oh sorry um, but he ended up touching canvas four times during this fight.

Now the referee got suspicious and said that something stinks here, so he called the fight on the grounds that hardock was actually he felt that harder was throwing the fight.

Well, an investigation was done and hard when asked.

If he was throwing the fight, he said he apologized for his lackluster performance and cited that he had personal anxiety due to his mother.

His aunt was gravely ill.

The commission didn’t buy it, they withheld his pay for the fight won.

They suspended him for six months and remember in these days, fighters were fighting like two three times a month, so that’s a whack load of income that didn’t come in his way and he wasn’t on the trajectory of the recognized world title.

Therefore, the fights that he was fighting, he wasn’t making anything like nothing substantial, so he then also got fined 500.

But in 1949 sugary robinson backed out of two fights against hard work.

You see this is mind-blowing for me, because okay, sugary robinson was not just an icon, he was, he was legend to me.

He he was the legend two people i thought was a legend.

Therefore, by association he this investigation or investigating for this, these series of fights really exposed the coward, the characters and uh and ray robinson.

He wasn’t the world’s best.

Um ray ended up using hardwick as a sparring partner um, but only to see ray ended up touching canvas in the sparring section of the hardware prepping for his fight against one steve pelosi now hardwick finished his career with an astonishing record of 244 fights.

178 wins with 48 knockouts and 56 losses when his career with a career like that, and yet he never won real money.

And what i mean by real money is that money that you can actually build a nest egg for are with there’s nothing shy of absurd and absolute travesty.

After a time from the ring in 1950, hard work found himself homeless and painless.

A great like this, who beat up sugaria, robinson homeless and penniless in the streets of chicago his wife, had left him and gained custody of their children.

According to the naval records management center in st louis missouri, hardwick had served in the united states navy during world war ii.

He was honorably discharged after being diagnosed with pugilistic dementia by the military doctors.

He kept his diagnosis a secret during his days in boxing.

In order to continue box england, due to his long and difficult boxing career hardwork, suffered from pugilistic dementia in his later years in 1955, he wrote to the navy asking for a copy of his discharge papers, which he claimed was stolen with, along with his social insurance Card now he it was later admitted he was later admitted to the veteran administration hospital in north chicago.

in 2011, hardwork was inducted into the international boxing hall of fame for 2012.

The boxing world finally paid some kind of tribute to the legacy of hubert lewis.

Unfortunately he wasn’t rewarded during his lifetime, like he should have been stories like this is no it’s heart-wrenching but, more importantly, it’s uh.

She can be a feisty one, yeah anyways, that’s my episode.

If you like this episode, please hit the like button and subscribe, don’t forget to hit the notification bell, it’s your boy ballin and that’s a scoop. 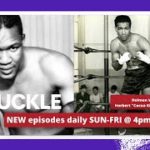 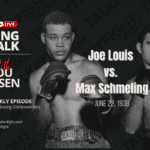