[, Music ] it’s four o’clock eastern standard time, and that must be my gore for knuckles.

This is breaking news bob.

They have declared that they have found a location for the tyson fury, anthony joshua fight, [, Music ].

They said it wasn’t going to, but it’s going to happen, you’re going to see joshua and fury fight it out for the best brit.

In the world, that’s amazing and they’re each going to make 100 million dollars.

That’S amazing! That’S amazing, give me a million bucks man i’ll get punched in the face a couple times, i’m good with that.

Hey 100 grand i’ll take a couple shots in the face million dollars to step in the ring to fight it out for the best brit in the world.

I can’t wait till this deal gets finalized, um yeah, but that’s not the only thing i have for you today already fans we’re going to talk about virgil ortiz.

I don’t know if you’ve heard of them – graham, you probably haven’t, because you know we always go over this because you’re old and i’m young.

That’S that’s why we have young guys like you on staff.

This is my man right here: 100 knockout artist, uh he’s an american fighter with mexican roots, and he only has one goal and it’s being crowned the world champion, but also establishing himself as the one of the best fighters in history.

This kid is hungry.

There’S talks in his next ring appearance could uh come against former junior welterweight and world champion maurice hooker uh ortiz only being 22 uh was only in action in july uh.

I guess due to covid.

He didn’t really fight too much but um.

He knocked out samuel vargas in seven rounds and was the second time the vargas has been stopped in his whole pro career.

[ Laughter ] shout out to neil the deal we’ll see you tonight, but uh yeah.

I know that this kid’s, the greatest deal by the way has uh on the air challenged justin bieber to to knuckle up.

Okay, you know what you know, what i’m gon na put it out there too justin bieber.

I challenge you knuckle up baby.

There was talking about him wanting to fight tom cruise yeah, yeah yeah.

I want to get in fight tom cruise honestly.

To be honest, so neil had gotten this uh in his head that justin bieber had been listening to his phone calls because on one you know how like you’ll, say something and then all of a sudden in google search you’ll be all oh wow where’d that come From anyway, so so so here’s neil the deal talking about boxing and juana clobber justin bieber next thing you know justin bieber’s.

His video is all about boxing.

Apparently his latest video uh, not being a justin bieber fan.

I can’t confirm or deny that, but but apparently why you’re not a 17 year old girl, bro, apparently not uh, but it i think i think so anyway.

So neil is convinced that justin produced this video all about boxing as uh, more or less laying down the gauntlet.

Okay, try and get hold of me: wow wow, neil neil get off the drugs brother.

That’S some craziness! What do you think people are like microphones with your smoke detectors and crap wow wow? That’S that’s some! That’S something! I’D like to win a million dollars! Please! Oh man yeah! So this kid man he’s uh he’s he’s the real deal.

Man like for real he’s trained by veteran coach, robert, garcia and uh garcia, believes that he’s ready this year to uh step into the welterweight ring against wbo champion terence crawford.

So that could be a big fight for this year, which um i would be really excited to see crawford crawford.

You know like he sees another big name in the game and uh it’d be nice to see this kid step into the ring with him and see.

What’S gon na happen, um, honestly and truthfully, i’m a crawford fan, so i’d say crawford might take it, but you know we can all have dreams and hopes, and apparently virtual artists got big dreams.

Well, i guess his management team’s got big dreams for sure, but uh.

He does man this kid wants.

He wants all the belts, man as an amateur.

He was a crown national champion, seven times um and had a record of 140 victories and 20 defeats.

He turned pro in 2016 signing with golden boy promotions and at this point in his career, ortiz um, you know he’s pushing for the biggest fights possible he wants.

He wants champions, he wants belts, he wants to go down his greatest.

You know the greatest person in in fighting history.

Man – and you know i don’t blame him with a with an impeccable record.

We should call him.

I don’t give a crap.

You’Ll understand what i’m talking about.

You know it shouldn’t take too long with all those knockouts that he’s got going on.

You know it’s not like you’re gon na be watching 12 rounders.

It’S uh he’s great uh, graham watch him like him cheer for him like we all do for you yeah.

You know what i think he’s after i think he’s after what we’re talking about on friday, night uh, when king rahim was on our show, i thought i think it’s all about money and i think yeah i think, if he’s with go, if anything, he was a Golden boy, golden boy setting them up for that they’re setting them up for that big painting for sure for sure – and you know what that’s that’s, what it comes to man when you’re in boxing and so it’s all who’s behind you and and how you get the Fights man now you get that big money, it’s all who’s backing you and you know, with golden boy back in him, you’re going to see him and i think some big big money fights in the next.

You know in this world this year for sure you’re going to see a lot of big money fights out of this game.

That’S for sure, just oh yeah! What about that? I’M pretty sure it’s uh, it’s very similar to any talent-based industry, whether you’re a musician or a filmmaker.

If you’re not signed to a major label and have major backing behind you, you’re going nowhere, no matter how talented you are, you can write the best thing.

You can write the best songs.

You can make the best movies, but if you don’t have big money behind you, you’re going nowhere, and i think that’s the exact same in boxing if ortiz was singing songs.

We’Ll have something good for you for sure all right guys. 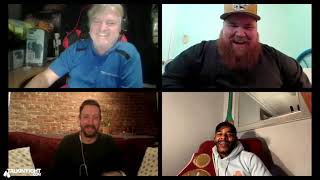