On this contentious episode, Big Ray brings up and discusses the dual issue of headgear and concussions in the sport of boxing, based on his experience, while keeping in mind most importantly the safety of boxers while fighting in the ring.

And another episode of the scoop featuring canadian heavyweight boxing champion and legend bola ray.

How are you doing tonight, bola ray i’m? Well, i’m well! Thank you.

Thank you for joining us.

What do you got tonight? Well again, first and foremost uh.

My name is bola ramirez and uh.

This is again the second episode of scoob.

I would like to take this time to thank you for [ Music ], allowing me the opportunity to give my perspective as to the issues surrounding boxing both today and yesterday.

Tonight i’m going to be discussing headgear or no headgear in the amateur rings when it comes to competitions um, on the heels of two nationally televised professional fights in november of 1982 um.

The course of amateur boxing took a turn for the better.

In my opinion, um with the introduction of headgear in all competitions, dooku kim a south korean fighter, fought an absolute war against rey boondo mancini, which resulted in dooku kim being brutally knocked out in the 14th round and then later.

Eight days later, succumbing to his injuries and dying another event, another fight that happened days later um was the fight, the legendary fight between randall, tech’s, cobb and larry.

The easton assassin holds where it was just.

It was a one-sided shellacking.

Now by then the new equipment protocols had was put into place was nothing shy of a band-aid solution to increase? Oh sorry, yeah there’s nothing shy of a bendy solution, um put in place by the amateur international boxing association to address the growing concerns of safety in the sport and increased negative publicity.

The 2016 olympics will be the first games in 32 years, where mailboxes didn’t wear headgear females.

Did i even justify this decision or the justification for this decision was that their research concluded that wearing headgear increased the likelihood of head concussion and blows related trauma to the head? Their research examined in two scenarios.

First, researchers examined first fight stoppages due to head blows from their world series boxing scenario, which was um.

It was a prelude to well.

This was supposed to be a prelude to a professional fights sort of thing.

I believe that uh, your record from those fights actually count as professional fights, aiba or sorry.

Secondly, the research looked at stoppages.

It was hypothesized that the headgear by increasing diameter and surface of the head gave a false sense of safety.

Um yeah boxers were engaged in more high risk, behavior um, and then they would without headgear.

In conclusion, this study reported the removal of headgear from ebook competitions.

Boxers seem to reduce the rate of stoppages due to headgear, due to blows ahead.

Additionally, the study’s author hypothesized that boxers became more experienced fighters without head gear no um and that education, educational head head up program, which is like the movement of your head defensively, came into effect and the rate of cuts even decreased.

The true issue that needs to be addressed at this time and currently well in my most humble, is the most helpless opinion is concussions in how to reduce and treat them.

That’S it that’s all from my experience.

Headgear does nothing to prevent concussions you get caught with a shot, a headgear doesn’t absorb, it doesn’t deflect the force.

Doesn’T do anything you feel the shot now granted um.

Well, i fought my whole boxing career as either a super heavyweight in the amateurs or heavyweight.

As a pro, but i know better weights with crazy power, steve muller stopped guys he’s 100 or 522 pounds, so i know for a fact that it does nothing.

It does nothing to curb concussions.

What headgear is actually really good for is the prevention of cuts.

I can honestly say that in my amateur career i was never cut once [ Music ].

Actually i remember the first cut i got was in what was my fourth pro fight and it came from a headbutt.

So dr robert canty said the idea that headgear prevents concussions is ludicrous to begin with.

Only to add it would be great if it did, but to think that taking off the headgear leads to fewer concussions doesn’t make any sense either.

Mark adams, a spokesperson for the ioc, the international olympic committee said medical and technical data that the organization organization gathered, leading up to the real games.

The 2016 games showed fewer concussions without headgear, without headgear, okay, um, cynthia burr of the university of southern california uh biomechanical research, who was who has evaluated boxing equipment for usa.

Boxing makes claim that there’s still a lot of research needed to be done when it comes to headgear wearing, resulting in concussions or more concussions, and yet female athletes still wear headgear, and that is due to lack of data.

Burr claims that aiba did not respond to the request for comments on their last statement.

Take that how you will it’s been hypothesized that concussions aren’t as much an issue in women’s for women, because often they lack the power to cause brain injuries with their punches.

That’S how you are saying that not me i i would love for them to whoever said that to accept a hook from an wolf and then make that statement.

You know wow, oh wow, that’s that was that’s incredible.

Despite the use of editors, the slj also reports that becky zelentes, a college geography teacher, was the first woman to die in a sanctioned empty boxing boat, even though she was it was received.

She received a punch in the head while wearing headgear and ringside physician was immediately there.

I cannot argue the findings by aiba that, due to increased diameter of the athlete’s head, the headgear would create a larger target and in doing so increase the likelihood of getting caught with the concussive blow.

But i do believe that the rate with which the increase cannot be significant.

They can prove me wrong and i’d love to see the data um, but i just don’t.

I’Ve been boxing 28 years um to think that the headgear was going to be that incrementally bigger make your target that much bigger that it’s going to offset that much! No, it doesn’t make sense to me it just doesn’t um.

As for their second claim, i have to say it’s just not true full stop.

I realize that there’s several different brands of uh headgear and, like i said in my 28 years of being in the sport, i’ve had easily a dozen i’ve worn easily a dozen.

If not, no, no even more friend, using other friends and stuff like that um, the notion that my vision could be impaired by the headgear is ludicrous.

This is a competition headgear if it’s snug to the head now.

I know that there’s some evil people out there who’s going to make fun of the size of my head and all i can say, is chris johnson you’re, a wretch steve mullener go crawl under a rock and julius.

I just don’t like you so leave it at that um, but the size of my head isn’t bigger by magnitudes the headgear on most importantly, in accordance to the second claim, this is what is known as an open face headgear, as opposed to a sparring headgear with What is known as lugs or cheek protectors, okay, open face, it does not impede my vision at all my periphery, oh, i don’t know how to show it to you, but i can i can’t no.

I can barely see the line on the outside through my peripheral, as i’m staring into the monitor.

So that’s the target and this is supposed to change the likelihood of being caught by so much yes, i do agree like yes, it makes your head bigger noticeably.

I don’t see it um, as you may have heard from my earlier, show my i’m a big supporter of bringing the standing account back into the rules uh for both amateur and and professional alike.

Even if he’s still standing.

This would take away from the aggressor losing out on any opportunities to stop the fight and would give the sport yet another genuine opportunity to not just minimize the opportunity of severe concussions but to make the sports safer before we wrap things up today.

I’D like to reiterate sorry um before we uh wrap things up today.

I’D like to reiterate the thought and comments of my opinions are based on personal experience.

I appreciate injuries are on a case-by-case basis and, as a result, may vary.

I would urge all competitors to consult their trainer and physician before making any decision for that matter, um when it comes to the boxing but um with that being said, i’ve said a lot here.

I look forward to hearing the comments on this.

One cheers thanks very much, for i appreciate that.

Be the first to review “Talkin Fight: The Scoop with Bola Ray” Cancel reply 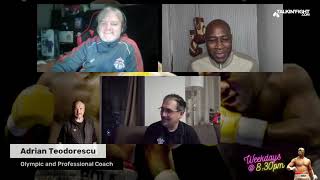 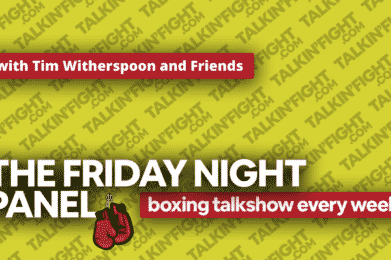 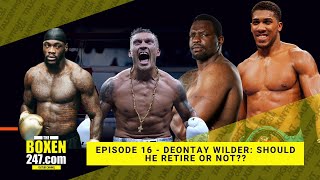 Deontay Wilder: Should he retire or not? | Boxen247 with Kristian | Talkin Fight