Nicholas Sullivan | Knuckle Up with Mike and Cedric | Talkin Fight

The upcoming match between Amanda Serrano and Sarah Mahfoud is sure to be a great battle!
Watch Knuckle Up’s Mike Orr and Cedric Benn, who always discuss up-and-coming young, hungry, and (usually) undefeated boxers during his live daily show at 4pm EST (9pm UK) on TalkinFight.com or YouTube.com/c/TalkinFight

Foreign [, Music, ] fight fans, thanks for tuning in to today’s episode of knuckle, Love featuring Yours Truly Mike Orr and my man, Cedric Ben again.

Welcome back from Bulgaria brother welcome.

Welcome back to the platform that we do here, which is prospects.

We got a new one for you guys and uh, I’m talking about Nicholas slick, Nick Sullivan.

Nine is fighting in the Norfolk Virginia.

Let’S talk about him, let’s do it Cedric! You know what it is have come out of: uh Norfolk, Virginia um, you know, Whitaker, one of the great defenses comes out of there more recently, uh um, Keyshawn Davis from and uh soon to be a world champion just finally fought in the end last weekend, and Now we have Nicholas Sullivan also so from looking to you know, maintain that living the footsteps of some of the great boxes that have come out of yeah, so so Sullivan, who is now 6-0 uh signed with Golden Boy promotions and turned Pro in August of 2019.

After an amateur career of over 120 votes, which included a 2014 USA, junior national championship title and a runner-up finish in the 2018 National Golden Gloves Sullivan fought once more in October of that year, but hasn’t he hadn’t fought again since then, but yes, amateur uh.

You know, USA, junior national championship, title, that’s huge man and then being a runner-up.

Is the 2018 National Golden Gloves.

So the kid definitely has um.

You know that that amateur background that you want that pedigree of great Fighters uh, you know kids, Arts about um the fact that he’s um, you know his influences man, Whitaker uh, May weather Haney, Garcia, and now he signed with Golden Boy huge things: man uh.

This kid I can’t wait to see this kid in the ring again uh.

Definitely it forced to be ranking with man uh.

You know another undefeated kid man and the kid has dedication man.

You know like uh in his last fight uh against uh Tyrone Jones uh.

He won by unanimous decision.

The fight headlined a four about uh, a four boat 11th annual big Fighters; Big cause card, which was co-promoted by Golden Boy promotions, the Sugar Ray Leonard foundation and B, Riley, FBR and uh.

You know this uh.

This definitely was a great match to watch man.

The southbound Jones found openings in the second round, uh working behind a jab and connecting with straight left Hands To The Head.

Finding some success, but Sullivan again was the busier more accurate puncher during the final round and uh.

That night, you know was a solid win for Sullivan.

He resides at a new Ford Virginia the same Hometown is multiple times world champion Pernell Whitaker who trained him as an amateur guys.

So this kid was trained by Pernell Whitaker as an amateur and the 2020 Olympic silver medalist Prospect.

Keyshawn Davis Solomon claim said he learned a great deal in the Jones fight and will become a better overall fighter guy.

So I can’t wait to see this kid jump back in there man, you know his coaches always taught him about adjustments and Sullivan after that fight.

It was his first time fighting the left-handed fighter since turning pro and he felt that he overcame the adversity which uh he did man with that wonderful unanimous.

You know unanimous decision Cedric, you know the kid Pernell Whitaker man trained as an amateur.

So definitely you can see it in the way.

This kid fights that man, his defense is definitely tight.

Um, you know, Brunel was one of his generation of all time.

So I know that’s one of the main things that has helped himself, because offense is always the the fun thing that people want to work on.

You know throwing somebody else, but avoiding those things, that’s the hard part about boxing.

So he has that that background from getting some knowledge from from um.

You know, I think, that’s one of the main things that’s going to help get help them get furnished career.

Definitely, definitely me too man, so guys.

You heard it here we’re talking about the kid Nicholas Sullivan signed the Golden Boy promotions.

Uh just fought, May 25th check them out check out this unanimous decision win first time against the left-hander, since turning pro the kid trained by Pernell Whitaker in the amateurs 2014.

You know 2015 uh, you know USA junior Championship here, the kid the kid knows what he’s doing in the ring guys so be on the lookout for Nicholas Sullivan on his climb through these paid ranks.

You will see more of this kid man on Golden Boy cards for sure forced to be record within that ring man.

You know, he’s got great skills you’re going to want to watch him.

So you heard it here from Mike or Emma man, Cedric Ben telling you know what to do. 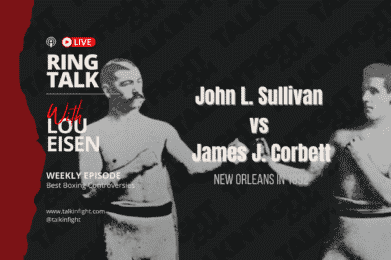