Undefeated Bektemir Melikuziev on the #GoldenBoy​ team is featured on this episode. Watch Knuckle Up with Mike Orr who discusses knockout artists on YouTube, like the UK’s Donte Dixon, or LIVE at talkinfight.com/live Weekday’s at 4pm EST #knockout​ #bestboxers​ #goldenboyboxing​ @Golden Boy Boxing​
.
.
.
#boxer​ #boxing​ #boxingtalkshow

How are you today we have another episode of knuckle up featuring mike or at four.

I you know why i’m doing great, why? Why are you doing great? Let’S hear it: it’s it’s! Ah, bang aka floyd mayweather’s birthday! Well, uh, there’s a knockout artist for you, yeah there’s, there’s! Definitely a knockout artist, uh happy birthday, floyd uh! I wonder what extravagant wonderful, ridiculous gift you’re buying yourself this year, uh? Hopefully, maybe four rolexes to add to the 40.

or maybe three more cars or maybe a new plane.

You know, buy whatever you want yeah.

As i was saying earlier, he has so many rolexes he’s giving them away anyways.

Yes, i have a guy for you for hump day we’re gon na talk about this guy.

He fought two weeks ago.

Malacusa must have missed that fight uh.

He fought against uh.

I believe it was fitch, morgan fitch on february 13th uh.

That was actually a wicked fight man uh ever since, watching that that’s what kind of got me onto this kid.

So i did a bit of background research on him he’s known as the bully and he’s you know.

A super middleweight southpaw uh he’s known as a bully he’s a very terrifying prospect he’s built like a tank with honestly man.

He hits you with a left hand that you know feels like it was forged in the lower depths of [ Laughter ] like hell, he hits you it’s like being hit with thor’s hammer, he’s uh, he’s 7-0 with six knockouts and and a few of those and A few of those knockouts are shots to the body as in a couple of shots to morgan, fitch’s body on the 13th when uh, when he fought him and uh.

That fight was really really entertaining.

This kid really is heavy-handed.

That boat was scheduled for eight rounds.

It only lasted three.

He was bloodied up in the second uh by the third round uh.

You know he just came in and and used those big meat hooks that he’s got he’s he’s just got the power in the in his hands and he just likes to punish guys in their body, and you know when you punish guys in their body, they tend To not be able to keep their hands up, and you know just it just leaves them open for these vicious knockouts that this kid is, you know capable of he’s.

He had an amazing amateur record as well uh compiling a a record of i believe.

It’S 58 and eight with the you know: nine knockouts he’s uh, you know he’s five.

Nine he’s got a seventy and a half inch reach, and you know, golden boy is – is smart to pick this kid up.

I noticed that yeah he’s from uzbekistan, so these guys apparently got a great boxing program and i’m gon na have to look in a little deeper to it.

Man, because they’re they’re coming out with these these vicious vicious boxers.

These guys are heavy-handed.

They got great drills, great footwork, they’re, dude they’re, doing things right over there and and i’m very impressed to see these guys and fight fans.

My knuckle up fans.

Hopefully, you got to see this guy, i don’t know if he did.

If you haven’t had a chance, just check out that morgan fitch fight, it was two weeks ago, february 13th.

It was a great event.

He came through with another knockout.

You know the ref, the ref just had to stop it.

He was battered and bloodied from the second and he was just running from this guy for the whole third, and he just came in with these body shots that you know my gut started rolling, feeling feeling for this guy that he was hitting he just hit.

So so big – and you know we’re gon na see a lot from him.

He took golds in the asian uh championships uh.

He was also a world amateur champion took silver and bronze.

So far you know: seven wins.

Go out there and watch him.

You know what i bring you, i bring you the best, graham i’m pretty sure that you you, you might have caught a glimpse.

You might have caught a glimpse of this kid few weeks ago, when we were watching those fights for our new show on sundays.

Remember to tune in on sundays i’ll give you a chance to uh catch that uh.

You know those knockouts as well man, you got ta check out our sunday show because we’re bringing the best knockouts of the week featuring our knockout artist of the week.

We should call him a knucklehead, i think, is uh what we’ll circle [ Laughter ].

Do you think, there’s a nice little competition going on between golden boy and match room over there.

You know what yeah, i believe.

So i believe so.

There’S there’s got to be something there, because the way these guys are just they’re picking up these young, these young hungry, you know good talent, fighters and they’re they’re searching every every corner of the globe to find them they’re, not just they’re, not just you know, sticking To one area you know they’re they’re, going as far as they can to every little country around the world and trying to find these these fighters, and it makes for great events.

So, let’s see it in boxing too right.

Sorry all right, i was gon na say at the end, at the tail end of uh the champs episode last night uh.

I asked him just spontaneously about the innovative style that lennox lewis had brought to the heavyweight division after the 80s after uh.

The heavyweight to kind of mike tyson dominate for a while.

Then it’s a tiny little vacuum and lancas brought in an unorthodox uh style as a tall, big heavyweight and uh.

You know not one that was going to punch from the inside, but uh.

You know well anyway, so so he he described the various styles of fighters over the years and in the heavyweight class that is, and it’s really kind of neat, and i have to wonder whether uh, given this diversity of these rosters, that these two management teams have Uh and going around the world and picking up these guys getting them into gyms training them it’d be interesting to hear if they train them, based on their own unique talent and style, or whether they actually train them with this style.

I i believe they just take.

They take what they have already their foundation and they just add to it and which gives these guys great repertoires.

The guys who got you know who have that great talent who have a big arsenal of weapons that they can use.

You know they play the angles they use.

You know the different levels of throwing that punch and you know putting the steps behind it, or even even just the way they generate or what angle it comes from.

It’S it’s great because it’s all different styles and it’s almost like they’re, just bringing it all together and just giving these boxers nowadays these great opportunities to to really have an arsenal of tools behind them.

Even though they’re just using two hands, you know it’s it’s great and we’re seeing that because i believe you know all the different boxing training around the world and it’s all coming together in one one area – and you know you obviously you’re gon na – take a guy And his fundamentals and hold on to them and you’re going to work with them because that’s the basis, that’s the groundwork and the groundwork is always the most important.

It’S the fundamentals, the basics, and then you just add on to that and that’s when all these these guys, when you know they come here and they train in the u.

So it’s great to see it.

I love it man, i think it’s i think it’s making up for you, know great boxing and we’re going to see great championships.

We’Re going to see a lot of greats happen in the next 10 years of boxing.

It’S it’s blown up and it’s it’s becoming its own.

It’S you know it’s because it’s becoming like it wasn’t back in the day, it’s becoming really exciting again to watch boxing and i’m glad to be.

You know part of this world and watch the boxing i’m just as a fan, i’m so excited to watch it.

You know when you sit and watch a boxing event.

You know it doesn’t matter if it’s 12 rounds, man that that crap flies by so quick because of the excitement of watching some of these fighters and the way they perform.

Man, you know fight fans, i bring you these exciting fighters.

This is the reason why so you can sit back for four or five hours and just stream fights and watch them.

That’S what i do all day.

I do it all day long and i’m so excited to do it.

People beat up you people, i love people watching it knocking out people man, i love it all.

It excites me man.

I can’t help it guys.

Man mike board 4, you know what i do.

Man, i bring you the youngest, the hungry, the talented, the unbeaten. 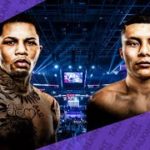 Gervonta Davis vs. Isaac Cruz | Watchin Live with Mike Orr and Cedric Benn | Talkin Fight
We use cookies on our website to give you the most relevant experience by remembering your preferences and repeat visits. By clicking “Accept”, you consent to the use of ALL the cookies.
Cookie settingsACCEPT
Manage consent